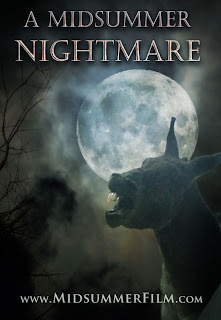 Jeff Moore and I had a great time at the Sacramento Sci-fi / Horror Show this past weekend. We met a lot of cool people and got to hang with Deneen Melody, our Marion in "A Midsummer Nightmare". Photos from the event and our first podcast are coming soon!

Visiting all the talented artists at the show inspired me to create another teaser graphic for the movie. Think you can do better? Enter A Midsummer Nightmare - Horror Movie Design Contest to win screen credit and exclusive prizes from the film!

We're looking for creative artists to help design the creatures of "A Midsummer Nightmare". All design submissions will be made online and entrants are encouraged to incorporate a range of mediums such as animation, sculpture, photography, painting and computer-generated and digital imagery. Visit our contest page to learn more.
Posted by Joshua Siegel at 8:48 AM No comments:

Click here to see the article and see the news:
Paradise Horror Film Released
Posted by L. Jeffrey Moore and Tyrel Ventura at 8:50 PM No comments: 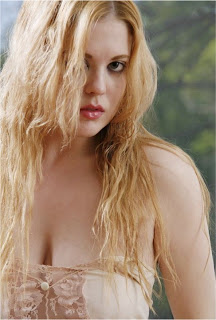 Arcadian Entertainment is proud to announce that Deneen Melody will be playing a lead role in the horror film "A Midsummer Nightmare". Deneen Melody is widely considered to be a rising star in independent film, especially the horror genre. She says, "When I first heard about A Midsummer Nightmare, I knew right away it was the type of project I had to be involved in. It has that nice mixture of dark fantasy, horror, action, and comedy... definitely my type of movie."

"A Midsummer Nightmare" follows a group of young actors who go to a remote wilderness campground to rehearse their next play: Shakespeare's "A Midsummer Night’s Dream". Their retreat soon becomes a nightmare as they are stalked by evil forest spirits, led by the murderous prankster Puck. Writer and director Joshua Siegel says that “A Midsummer Nightmare” will have the dark fantasy flavor of films like “Pan’s Labyrinth” while retaining the fun B-movie feel of horror series like “Leprechaun” or “Wishmaster”.

Producer L. Jeffrey Moore says, "When people ask me what's my next project I mention Midsummer Nightmare and tell them a little about it and they get excited. I can't wait to give them a scare that they'll never forget."

"A Midsummer Nightmare" is the second feature from Arcadian Entertainment and writer/director Joshua Siegel. Siegel's first horror film "Bloodwood Cannibals" will be released on DVD by Eagle One Media on September 14.
Posted by Joshua Siegel at 4:09 PM No comments: